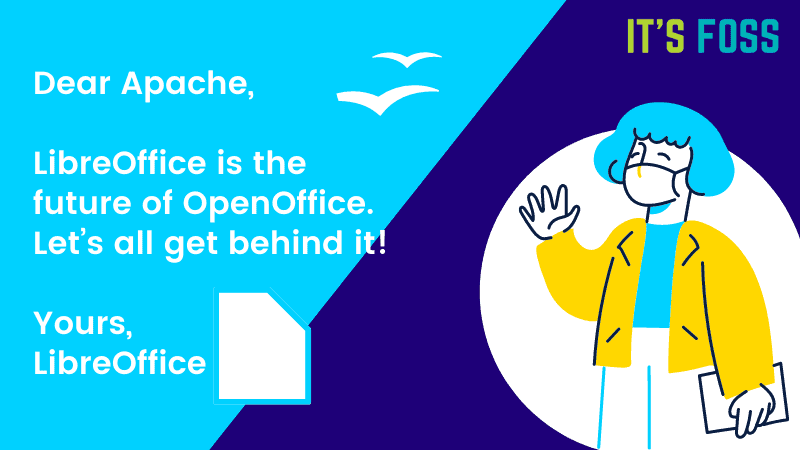 It is a no-brainer that Apache OpenOffice is still a relevant recommendation when we think about open source alternatives to Microsoft Office for Linux users. However, for the past several years, the development of OpenOffice is pretty much stale.

Of course, it is not a shocker, considering Abhishek wrote about the possibility of Apache OpenOffice shutting down back in 2016.

Apache OpenOffice is History, LibreOffice is the Future?

Even though I didn’t use OpenOffice back in the day, it is safe to say that it is definitely not a modern open-source alternative to Microsoft Office. Not anymore, at least.

Yes, Apache OpenOffice is still something important for legacy users and was a great alternative a few years back.

Here’s the timeline of major releases for OpenOffice and LibreOffice:

Now that there’s no significant development taking place for OpenOffice, what’s the future of Apache OpenOffice? A fairly active project with no major releases by the largest open source foundation?

It does not sound promising and that is exactly what The Document Foundation highlights in their open letter:

OpenOffice(.org) – the “father project” of LibreOffice – was a great office suite, and changed the world. It has a fascinating history, but since 2014, Apache OpenOffice (its current home) hasn’t had a single major release. That’s right – no significant new features or major updates have arrived in over six years. Very few minor releases have been made, and there have been issues with timely security updates too.

For an average user, if they don’t know about LibreOffice, I would definitely want them to know. But, should the Apache Foundation suggest OpenOffice users to try LibreOffice to experience a better or advanced office suite?

…many users don’t know that LibreOffice exists. The OpenOffice brand is still so strong, even though the software hasn’t had a significant release for over six years, and is barely being developed or supported

As mentioned in the open letter, The Document Foundation highlights the advantages/improvements of LibreOffice over OpenOffice and appeals to Apache OpenOffice that they start recommending their users to try something better (i.e. LibreOffice):

We appeal to Apache OpenOffice to do the right thing. Our goal should be to get powerful, up-to-date and well-maintained productivity tools into the hands of as many people as possible. Let’s work together on that!

What Should Apache OpenOffice Do?

If OpenOffice does the work, users may not need the effort to look for alternatives. So, is it a good idea to call out another project about their slow development and suggest them to embrace the future tools and recommend them instead?

In an argument, one might say it is only fair to promote your competition if you’re done and have no interest in improving OpenOffice. And, there’s nothing wrong in that, the open-source community should always work together to ensure that new users get the best options available.

On another side, one might say that The Document Foundation is frustrated about OpenOffice still being something relevant in 2020, even without any significant improvements.

I won’t judge, but I think these conflicting thoughts come to my mind when I take a look at the open letter.

Do you think it is time to put OpenOffice to rest and rely on LibreOffice?

Even though LibreOffice seems to be a superior choice and definitely deserves the limelight, what do you think should be done? Should Apache discontinue OpenOffice and redirect users to LibreOffice?

Your opinion is welcome.