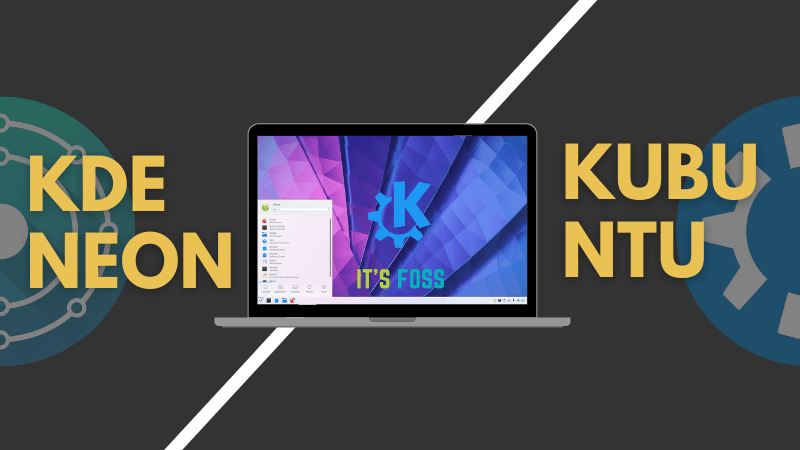 When you find two Linux distributions based on Ubuntu and powered up by KDE, which one do you choose?

I know it is often confusing especially if you have never used either of them but got them as recommendations for usage. Hence, to help you make a decision, I thought of compiling a list of differences (and similarities) between KDE Neon and Kubuntu.

Let’s start with getting to know the similarities and then proceed with the differences.

Note: Depending on your system, your experience with the distributions might differ. So, take this article as a reference and not a “what’s better” comparison.

It’s always good to compare distribution based on their similarities. So, theoretically, I’ve tried to put down the most important differences.

However, it is worth noting that the compatibility, performance, and the stability of the distros will vary depending on your hardware and hence, that has not been accounted here.

Ubuntu as the Base

Yes, both the Linux distributions are based on Ubuntu. However, KDE Neon is based only on the latest Ubuntu LTS release while Kubuntu offers an Ubuntu LTS based edition and a non-LTS edition as well.

KDE Neon does offer testing editions and developer editions but those are meant to test pre-release KDE software.

Even though both of the distros feature KDE plasma desktop and you can get the same level of customization, KDE Neon gets the latest KDE Plasma desktop release first.

If you did not know already, KDE Neon is developed by the official KDE team and was announced by Jonathan Riddell (Founder of Kubuntu) after he was forced out of Kubuntu by Canonical.

So, not just limited to the latest Plasma desktop, but if you want the latest and greatest of KDE as soon as possible, KDE Neon is the perfect choice for that.

Kubuntu will eventually get the update for newer KDE software — but it will take time. If you’re not too sure about the latest KDE software/desktop and all you need is a stable KDE-powered system, you should go with Kubuntu LTS releases.

Out of the box, you will find Kubuntu to have several essential tools and applications pre-installed. But, with KDE Neon, you would need to find and install several applications and tools.

To give you some perspective, KDE Neon might turn out to be a lightweight distro when compared to Kubuntu. However, for new Linux users, they might find Kubuntu as an easy-to-use experience with more essential software and tools pre-installed.

If you are not using a metered connection, this may not matter at all. But, just for the sake of it, I should mention that KDE Neon gets more software updates considering the regular Ubuntu LTS fixes/updates along with KDE software updates.

With Kubuntu, you just get the Ubuntu LTS updates (unless you’re using the non-LTS edition). So, technically, you can expect less number of updates.

Ubuntu with KDE vs Plasma Experience

I know if you haven’t tried both of them, you might think of them as pretty similar. But, Kubuntu is an official flavour of Ubuntu that focused more on the experience with Ubuntu on a KDE desktop environment.

While KDE Neon is technically the same thing, but it is all about getting the best-in-class Plasma desktop experience with the latest stuff on board.

Even though both the distributions work amazing out of the box, they have a different vision and the development proceeds on both them accordingly. You just have to decide what you want for yourself and choose one of them.

As I mentioned earlier, this is not a fact-based point here. But, as per my quick look on the feedback or experiences shared by the users online, it seems that Kubuntu works with a wide range of old hardware along with new hardware (potentially dating back to 2012) while KDE Neon may not.

It’s just a thing to keep in mind if you try KDE Neon and it doesn’t work for some reason. You know what to do.

So, what would it be? KDE Neon or Kubuntu? That’s really is your choice.

Both are good choices for a beginner-friendly Linux distribution but if you want the latest KDE Plasma desktop, KDE Neon gets the edge here. You can read more about it in our review of KDE Neon.

Feel free to let me know your thoughts in the comments down below and what do you find good/bad on either of them.