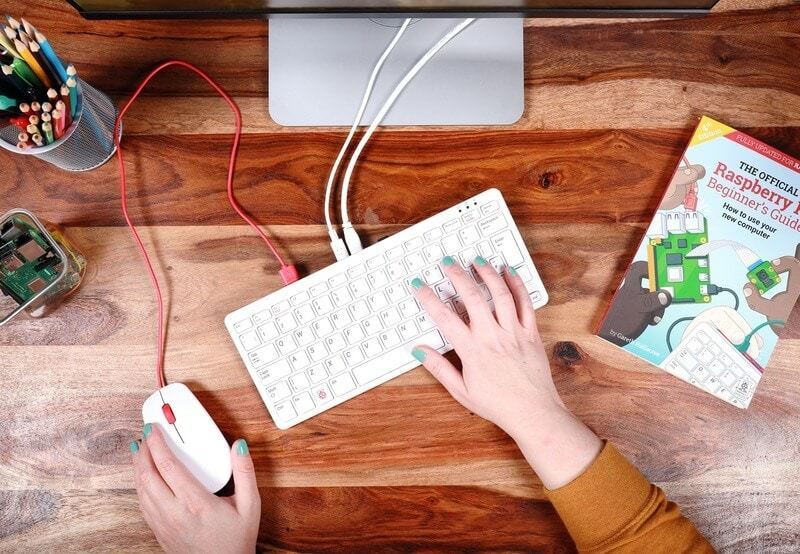 Raspberry Pi needs no introduction. What started as a low-spec computer for DIY enthusiasts, it can now be used as full-featured desktop.

If you remember, Commodore 64 was also a computer in the form of a keyboard back in 1982. Even though it isn’t unique, for a successful product like Raspberry Pi, it is a sweet deal.

It is based on the Raspberry Pi 4 (with 4 GB RAM) and has been tweaked to run cooler as well. With a Quad-core processor, it is faster than ever.

Not just limited to the ease of use and portability, but it should save you a lot of desk space. And, just like me, if you were planning to get a spare computer to test stuff, I think I may want to go with the Raspberry Pi 400 instead of building another PC or Linux-based mini PC.

Even though I’ve mentioned the tech specs below, you can watch the official video to get an idea on how it looks and if it’s promising enough as your home computer:

For $70, this is the best modern home computer that you can get with the simplicity of just having a keyboard and being able to carry it anywhere (you just need a screen to connect to).

You can either get just the Raspberry Pi 400 for $70 or get the complete kit for $100 with a USB mouse, micro HDMI to HDMI cable, USB-C power supply, a beginners guide, and an SD card with Raspberry Pi OS pre-installed.

If you’re wondering, for the keyboard layout support, here’s what the press release mentioned:

At launch, we are supporting English (UK and US), French, Italian, German, and Spanish keyboard layouts, with (for the first time) translated versions of the Beginner’s Guide. In the near future, we plan to support the same set of languages as our official keyboard.

In other words, they support every major keyboard layout to start with. So, it shouldn’t be an issue for the majority.

In addition to the details for keyboard layout, here’s how you can get your hands on a Raspberry Pi 400:

UK, US, and French Raspberry Pi 400 kits and computers are available to buy right now. Italian, German, and Spanish units are on their way to Raspberry Pi Approved Resellers, who should have them in stock in the next week.

We expect that Approved Resellers in India, Australia, and New Zealand will have kits and computers in stock by the end of the year. We’re rapidly rolling out compliance certification for other territories too, so that Raspberry Pi 400 will be available around the world in the first few months of 2021.

Of course, if you’re anywhere near Cambridge, you can head over to the Raspberry Pi Store to pick up your Raspberry Pi 400 today.

Raspberry Pi 400 is definitely something impressive and useful in the current time when remote work is becoming the new norm.

What do you think about the new Raspberry Pi 400? Planning to get one? Let me know your thoughts in the comments below.