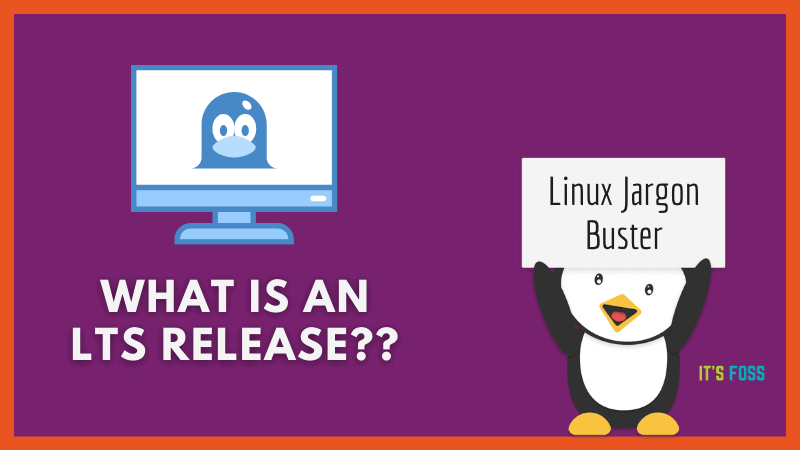 In Linux world, specially when it comes to Ubuntu, you’ll come across the term LTS (long term support).

If you’re an experienced Linux user, you probably know the various aspects of a Linux distribution like an LTS release. But, new users or less tech-savvy users may not know about it.

In this chapter of Linux Jargon Buster, you’ll learn about what is an LTS release for Linux distributions.

What is a Long Term Support (LTS) Release?

Long-Term Support (LTS) release is normally associated with an application or an operating system for which you will get security, maintenance and (sometimes) feature updates for a longer duration of time.

The LTS versions are considered to be the most stable releases which undergoes extensive testing and mostly includes years of improvements along the way.

It is important to note that an LTS version of software does not necessarily involve feature updates unless there’s a newer LTS release. But, you will get the necessary bug fixes and security fixes in the updates of a Long Term Support version.

An LTS release is recommended for production-ready consumers, businesses, and enterprises because you get years of software support and no system-breaking changes with software updates.

If you notice a non-LTS release for any software, it is usually the bleeding-edge version of it with new features and a short span of support (say 6-9 months) when compared to 3-5 years of support on an LTS release.

To give you more clarity on LTS and non-LTS releases, let’s take a look at some pros and cons of choosing an LTS release.

Now, that you know what is an LTS release and its pros and cons it’s time to know about Ubuntu’s LTS release. Ubuntu is one of the most popular Linux distribution and one of the few distributions that has both LTS and non-LTS releases.

This is why I decided to dedicate an entire section to it.

What is Ubuntu LTS?

The latest LTS release is — Ubuntu 20.04 and it will be supported until April 2025. In other words, Ubuntu 20.04 will receive software updates till then. The non-LTS releases are supported for nine months only.

You will always find an Ubuntu LTS release to be labelled as “LTS“. At least, when it comes to the official Ubuntu website to explore the latest Ubuntu releases.

To give you some clarity, if you notice Ubuntu 16.04 LTS, that means — it was released back in April 2016 and is supported until 2021 (considering 5 years of software updates).

Similarly, you can guess the update support for each Ubuntu LTS release by considering the next 5 years of its release date for software support.

Ubuntu LTS software updates: What does it include?

Ubuntu LTS versions receive security and maintenance updates for the lifecycle of their release. Unless the release reaches the End of Life, you will get all the necessary security and bug fixes.

You will not notice any functional upgrades in an LTS release. So, if you want to try the latest experimental technologies, you may want to upgrade your Ubuntu release to a non-LTS release.

I’d suggest you to refer our latest Ubuntu upgrade guide to know more about upgrading Ubuntu.

I would also recommend you to read our article on which Ubuntu version to install to clear your confusion on different Ubuntu flavours available like Xubuntu or Kubuntu and how are they different.

I hope you have a better understanding of the term LTS now specially when it comes to Ubuntu LTS. Stay tuned for more Linux jargon explainers in the future.