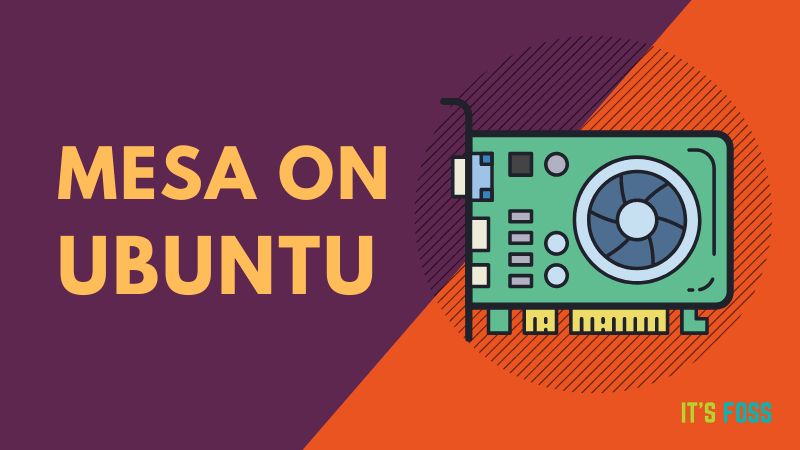 This quick tutorial shows the steps to get a newer version of Mesa drivers on Ubuntu, be it stable release or cutting-edge development release.

Mesa itself is not a graphics card like Nvidia or AMD. Instead, it provides open source software implementation of OpenGL, Vulkan, and some other graphics API specifications for Intel and AMD graphics hardware. With Mesa, you can play high-end games and use applications that require such graphics libraries.

More information on Mesa can be found in this article.

How to install Mesa on Ubuntu?

Mesa comes preinstalled on Ubuntu with the open source graphics drivers of Radeon, Intel and Nvidia (sometimes). Though it probably won’t be the latest Mesa version.

You can check if your system uses Mesa and the installed versions using this command:

If for some reasons (like playing games), you want to install a newer version of Mesa, this tutorial will help you with that. Since, you’ll be using PPA, I highly recommend reading my in-depth guide on PPA.

Installing new Mesa graphics drivers may also need a newer Linux kernel. It will be a good idea to enable HWE kernel on Ubuntu to reduce the chances of conflict with the kernel. HWE Kernel gives you the latest stable kernel used by Ubuntu on an older LTS release.

The Kisak-mesa PPA provides the latest point release of Mesa. You can use it by entering the following commands one by one in the terminal:

It will give you the latest Mesa point release.

Remove it and go back to original Mesa driver

If you are facing issues and do not want to use the newer version of Mesa, you can revert to the original version.

And then use it to remove the PPA as well as the Mesa package version installed by this PPA.

If you want the latest Mesa drivers as they are being developed, this is what you need.

There is this awesome PPA that provides open source graphics drivers packages for Radeon, Intel and Nvidia hardware.

The best thing here is that all driver packages are automatically built twice a day, when there is an upstream change.

If you want the absolute latest Mesa drivers on Ubuntu and do not want to take the trouble of installing it from the source code, use this PPA by Oibaf.

Open the terminal and use the following commands one by one:

This will give you the latest Mesa drivers.

Remove it and go back to original Mesa driver

You can remove the PPA and the installed latest Mesa driver using the ppa-purge tool.

Now use it to disable the PPA you had added and revert the Mesa package to the version provided by Ubuntu officially.

I hope this quick tutorial was helpful in getting a newer version of Mesa on Ubuntu. If you have questions or suggestions, please use the comment section.